What makes Dries Van Noten’s clothes so coveted by his pockets of fans around the globe, is the wide variety of inspiration he collides together, from each of these corners.

“For me, other cultures have always been a starting point, ” he recently told Tim Blanks at a Business of Fashion forum. “But I never took things very literal. Quite often, we take one element that we like…and mix it to be something very personal.”

But in an age where the line between cultural appropriation and homage can be fine in the eyes of critics and consumers, he admits referencing other cultures has become “more difficult now” despite it being the “alphabet of his fashion”. Instead Van Noten is moving towards the art world as a springboard from which to create. 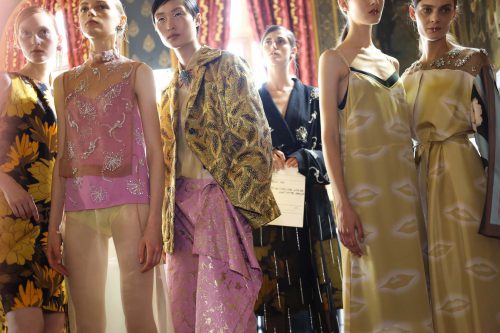 For his most recent SS18 collection, which will  land at Poepke in coming weeks, Van Noten referenced Picasso’s “Les deux demoiselles faisant leur toilette.” For this, Picasso constructed a collage of found materials, largely consisting of wallpapers featuring varying motifs, rather than his usual medium of paint. So just like the cultural references Van Noten is used to stirring together, he became captivated by Picasso’s haphazard mixes.

Van Noten took elements from the prints to create an assemblage of motifs through the decades – from surrealist lips to forties wallpaper, sixties couture flowers and bourgeois scarves straight from the seventies.

For more of Van Noten’s conversation with Tim Blanks, see below, and for more Dries Van Noten at Poepke, you can click here.

Sorry, the comment form is closed at this time.